But their story all season has been about Chuckstrong; supporting their head coach Chuck Pagano, who had been fighting Cancer for most of the season.
He has returned and led them to an rousing victory over the AFC South Champion Houston Texans in Week 17.

On the other side, the falling Baltimore Ravens.

After a strong start had people thinking Joe Flacco was ‘elite’, he has struggled to stay consistent for most of the remaining season.  Play calling has been questioned and the offensive coordinator fired.  In order to have any chance in this game, they must get Pro Bowl running back Ray Rice going.

But on their end, their emotional and football leader, Ray Lewis, has announced his retirement whenever this season ends.  Miami writer Dan LeBatard, who covered his college career, called Lewis, “the greatest leader of my lifetime.”  He will be before his Baltimore crowd one last time, Sunday.

Since Joe Flacco has been in the NFL, he has won at least one playoff game each time he has made the playoffs.  Nonetheless, I think the QB who makes the least mistakes will win this game.

But the major story is their fall from possible #1 seed bye to playing in the first week.  Suddenly, after dominating the AFC for most of the year, the Texans become the lowest seed to ever lead the league in wins through 16 weeks.

They will look for Matt Schaub to limit mistakes and keep their ground attack moving.  Arian Foster, despite a league high 15 TDs, only had 4.1 yards per carry this year, worst for his career.  He will have to pick it back up despite the heart condition that was found, and considered okay, this month.

On the Bengals end, Andy Dalton has led the Bengals to their first back-to-back playoff appearances in three decades.  But last year, in the most important game of his career, he stunk up the stadium and lost.  He has been far more consistent this year and will look to change it.

This matchup seems like the defenses will be heavily involved.  The Bengals have a strong secondary, while the linebacker and rush corps of the Texans are their strengths.  J.J. Watt and company will be too strong for the Bengals. 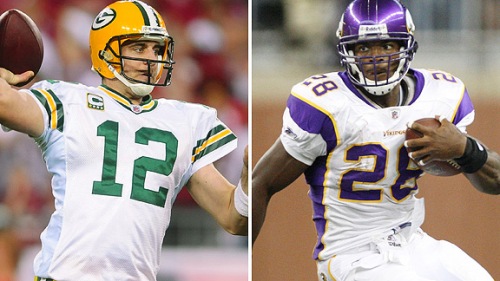 The Opposite Offense Bowl

This year, they have added a new wrinkle with the big play ability of Randall Cobb.  His breakthrough has helped make up for the injuries sustained by Jordy Nelson and former #1 threat, Greg Jennings.  Most of the time, bad weather would be a boon for a passing team, but Aaron Rodgers has always played strong in bad weather.  The problem will be holding onto any lead with the lack of runners at their disposal.

On the Vikings side, Christian Ponder has been barely adequate.  While his numbers look good enough, 18:12 TD to INT, he only threw for 900 yards more than his running back ran for.

And that running back was something this year.  Adrian Peterson, incredibly coming off an ACL injury, came within 9 yards of Eric Dickerson’s single season rushing record.  While failing to do that, his running over the past few weeks have shot him into the League MVP conversation and his team into the playoffs.

The Packers have not been strong in many big games since their Super Bowl win, but kept it close with the Vikings last week despite having little to play for.  I think this one is close and it will come down to embattled kicker, Mason Crosby, who will continued to be embattled.

Saving the most intreguing for last, the NFL will bring the fans the Redskins vs. the Seahawks late afternoon on Sunday.  This will be the battle between two rookie QBs, Robert Griffin III and Russell Wilson.

Both are coming in hot: Washington has won their final seven games to jump over the Cowboys and Giants and win the NFC East while Russell Wilson has been the NFL’s best QB in the second half.

RGIII has been no slouch himself, leading a surprising offense and injury-ravashed defense to the playoffs in just his first year.  The surprising part of this, though, is rookie running back, Alfred Morris, who in most years would have won the Rookie of the Year with his 1,613 rushing yards and 13 TDs.

Seattle has been strong offensively and well rounded as well, but their secret weapon is their defense, that has suffocated some of the best offenses in the NFL (like the Jets…just kidding).  That should continue on Sunday, ending a comeback season for Mike Shannahan.

Rest of my playoff picks: