The Invisibility of The Knicks’ Iman Shumpert 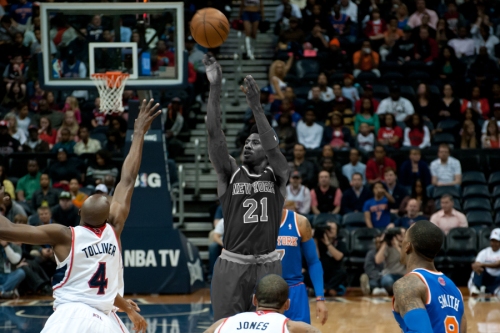 We started the season under the guise that perhaps Iman Shumpert could get traded at some point.  Fans pointed towards his defense and those few foreshadowing sparks of offense he has had over his career as signs that there was potential that we could not overlook.

Then came the Kenneth Faried rumors and we saw that the league does not quite value Shump like we do, as Denver laughed off that trade possibility.  Still, trade rumors loomed.

Suddenly as the calendar turned to 2014, Shumpert started to shine.  On a Texas road trip, he got hot from 3-point land, going 6-8 and 6-6 in consecutive nights vs. the Spurs and Rockets.  Scoring 27 and 26 in back to back games, he became the first Knick be the lead scorer in a game that Carmelo Anthony played this season.

Things were looking good, even without the points, as the game prior to the trip, against the Raptors, and the two after his scoring stretch, vs. the Mavericks and Pistons, had him contributing in many columns.

But since then, he has had a rough go.  Since the 20+ point outbursts, he has averaged under 6 points per game, in over 30 minutes a game.  Among players getting 27 or more minutes per game this season, Shumpert ranks dead last in points per game with 7.1 (before Monday’s game). 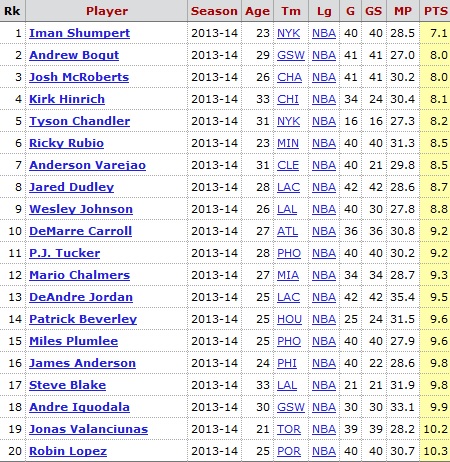 There has been little growth in his offensive game since he has arrived in New York and for a team that has had trouble scoring beyond Carmelo Anthony this season, his involvement, especially for that many committed minutes, in needed.

What is to blame for this? It is hard to tell.  It could be a few factors.

One could be his injury-prone past: he missed 7 games in his rookie season and tore his ACL in the playoffs, getting him off to a slow start the following season, in 2012-13, when he only played in 45 games.

Or perhaps it is the cast around him. It is probably not that easy to get the ball when you have Melo and JR Smith on your team.  Having two hurt point guards that are better at spreading around the ball may be affecting him as well.

It may be the other end of his game.  His propensity for defense first, especially on team which has few others with that focus, has led to foul trouble.  Uneven playing time and just the effort and energy he has to use to make stops may be part of the larger issue.

We can also look at the Knicks organization, which has had trouble churning out young stars in the past.  This can include coach Mike Woodson, who has seemingly had issues creating a significant offensive role for Shumpert for most of his career.

Whatever the reason is, on this struggling Knicks team, which has had a ton of missed games from Tyson Chandler, Ray Felton, Amare Stoudemire, Pablo Prigioni, and others, and getting almost a complete negative out of Smith this season, they need Iman Shumpert to turn it around fast, and start making the same strides offensively, that he has already made to his profession defensive game.

Otherwise, those trade rumors may just return before his possible potential is reached.