Tim Tebow Signs With The Patriots 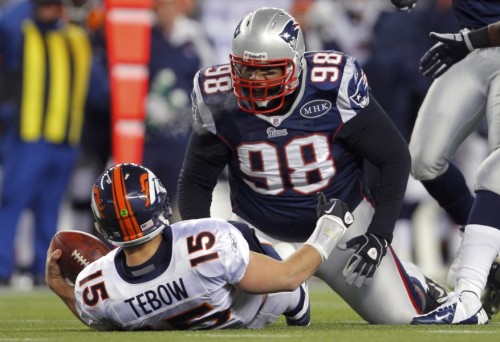 Tim Tebow has signed with the New England Patriots.

According to ESPN’s Chris Mortensen, he has signed to be a QB, not an RB or TE.

So, the Bill Belichick signed a bench player.  Not much more analysis needed.

Oh, we have to talk about this every second of every day going forward?  Okay, I’ll expound. END_OF_DOCUMENT_TOKEN_TO_BE_REPLACED

Some Reasons Why The Jets Traded For Tim Tebow

On December 27, 2012, the Jets finalized the last days of Tebow in New York by declining once again to start him – even after the injury to current starter, Greg McElroy – in favor of embattled former starter, Mark Sanchez.

There will be a lot of articles talking about what a failure this was for the Jets, but let’s look at the Jets mindset on that day in March.

Here, in order, are some of the reasons the Jets traded for Tim Tebow.

END_OF_DOCUMENT_TOKEN_TO_BE_REPLACED

Tim Tebow: Not a Savior, Nor a Sanchize Killer, Just Another Bad Jets Decision

Governor Chris Christie ecstatically welcomed him to New Jersey.  The Daily News had the Statue of Liberty in his famous stance.  His legion of fans were ready to take New York by storm.

Tim Tebow, coming off a surprise season where he relieved Kyle Orton in Denver and led the Broncos to a playoff overtime victory, was now a Jet.  Woody Johnson and Mike Tannenbaum helped complete the trade – giving Denver a 4th and 6th round pick – and putting the Jets right back in the forefront with the second consecutive sports story to knock the standing Super Bowl Champion Giants off the covers.

So was the end of the Jets season.  We just didn’t know it yet.
END_OF_DOCUMENT_TOKEN_TO_BE_REPLACED

Save the Sanchize: Why the Rams Game Could Be The Most Important Game of Mark Sanchez’s Career

Mark Sanchez has played in a ton of big games so far in his career.  In the first two years, he did very well in them, including big wins he played well in during the playoffs that he still does not get enough credit for.

Last year, we saw a bit of a regression out of Sanchez in the clutch, as well as fewer big games for him to play.

END_OF_DOCUMENT_TOKEN_TO_BE_REPLACED

Week 7 Notes: A Newly Discovered Way The Jets Were Screwed Sunday [and more!]

[1] A few different issues with the game process have been called out since Sunday that could have affected the result of the Jets-Patriots game.  First there was the thought that Bill Belicheck had illegally thrown his challenge flag on the Aaron Hernandez goal line fumble.  That was determined to be false, despite cheers from the crowd indicating he had thrown it.

Second was the questionable actions of the New England timekeeper.  Barely any time was eclipsed from the start of Devin McCourty’s kick return to the moment he fumbled; the clock was conveniently stopped at 2:01, allowing the Patriots to have a mandatory timeout on their side.  Again, the NFL came to the Patriots’ defense and ruled that everything was kosher.

Now yesterday, Grantland’s Bill Barnwell brings up the fact that on the game’s concluding play, Pats’ lineman Jermaine Cunningham fell at the line of scrimmage, then crawled towards Mark Sanchez and was “diving at his ankles…knocking him down.”